Last week saw the commemorative birthday of a man who has made many invaluable contributions to science, yet was sadly poorly recognised for his efforts during his lifetime. The 10th July 2014 marked the anniversary of Nikola Tesla's 158th birthday and this year in particular has been important in ensuring that the Serbian-American inventor's greatest achievements are not overlooked by history.

For quite some time, creator of The Oatmeal comic, Matthew Inman, has been in support of plans to build a museum dedicated to Nikola Tesla on the 16-acre site of Tesla's last laboratory at Wardenclyffe in Shoreham, New York. The comic has praised Tesla in the past, referring to him as 'the greatest geek who ever lived', and noting his achievements and notable times at which Thomas Edison successfully hindered Tesla's career. Through crowdfunding, $1.37 million was raised to buy the land, but this was just the beginning. The site includes a derelict factory space that is ridden with asbestos, so this would need to be destroyed or renovated, before even considering the cost of setting up the museum and subsequently running it. The minimum additional figure to achieve this was estimated to be $8 million.

Undeterred, Inman used the popularity of The Oatmeal to pose a request to Elon Musk, CEO of electric car company, Tesla: to show gratitude to his company's namesake by donating the remaining $8 million to the cause. Tesla Motors is named such not because of any familial connection to Tesla himself, but because every single one of their cars is powered by an AC induction motor, a design patented by Tesla in 1896. Musk did not disappoint. He agreed to contribute $1 million to the cause and also agreed to build a supercharging station for Tesla Motors at the Wardenclyffe site. Yet surely the CEO of rocket company Space X and co-founder of Paypal has more than $1 million in spare notes nestled between the couch cushions in his Los Angeles roost? 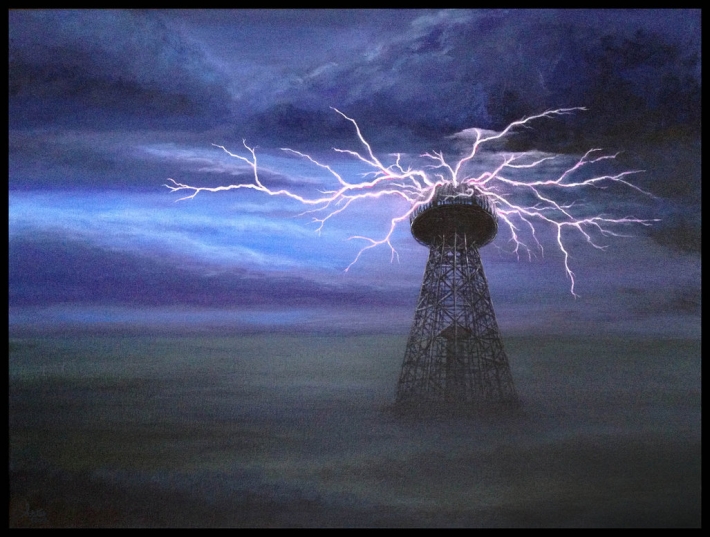 So the Tesla museum is a couple of steps closer to becoming a reality, though a great deal of time and money is needed before the museum is ready to be opened to the public. Apart from the derelict warehouse that needs to be dealt with, there are believed to be tunnels underneath the building, including a 'huge underground resonance chamber', supposedly housing some of Tesla's equipment. This prospect conjures images of steampunk-esque contraptions and eccentric plans (though schematics of Tesla's are rare, as he had an uncanny ability to build equipment simply from visualising details in his mind). The museum, when complete, sounds like an expensive affair to maintain, as it is intended to be a dynamic place that encourages repeat visits and extended participation. Rather than a static museum, it will be a science centre with changing exhibits, lectures and work spaces for researchers and students.

Before moving to the Wardenclyffe site, Tesla's lab was situated in Colorado Springs, where he conducted many of the experiments that would lead to the construction of his wireless communications tower at Wardenclyffe. In Colorado Springs, he conducted many high voltage, high frequency experiments with electricity. His 'Magnifying Transmitter' generated arcs up to 7m long and produced millions of volts. This transmitter was an advanced version of a 'Tesla coil', a a transformer circuit which produces high voltage, low current, high frequency, alternating current electricity. Tesla intended to use this to achieve wireless transmission of electrical energy. 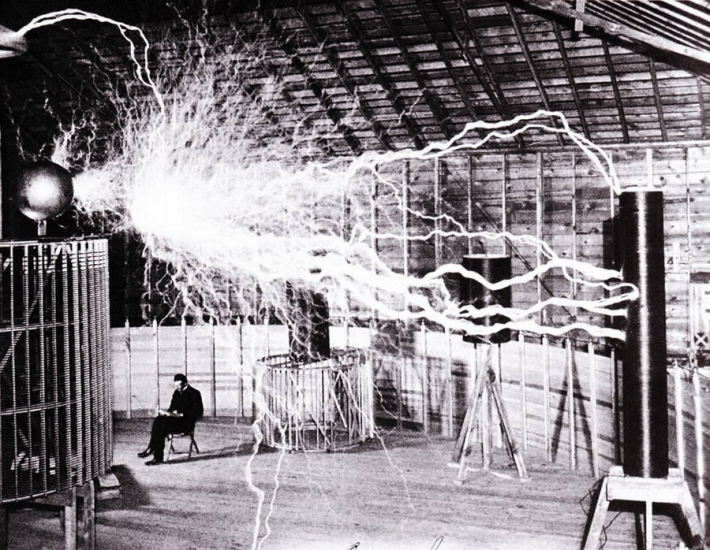 Tesla in his laboratory in Colorado Springs, Colorado, in December 1899. The image is actually a double exposure, created by exposing the photographic plate twice (once to capture the electrical bolts, and then a second time to capture the rest of the equipment and Tesla sitting in the chair).
Credit: Dickenson V. Alley

He generated artificial lighting, the effects of which were felt for miles around. Fifteen miles away in Cripple Creek, reports of thunder were announced, resulting from Tesla's experiments. People in the local areas reportedly saw sparks leaping between their feet and the ground as they walked, and light bulbs that glowed even when turned off. Blue halos of Elmo's fire surrounded fluttering butterfly wings. These experiments prepared Tesla for the construction of his Wardenclyffe transmission tower and wireless broadcasting system, which he began planning in 1900, having received funding from financier J P Morgan.

The Wardenclyffe site is an ideal spot for a museum dedicated to Nikola Tesla. It was here that the inventor built a 187 foot (57m) transmitter tower during 1901-1903, to experiment with sending messages wirelessly and distributing wireless electricity. He planned to provide the entire globe with free wireless electricity, using the Ionosphere to transmit the electrical energy. Tragically, his over-generous plans were halted when J P Morgan realised that there would be no way to regulate the services provided by Tesla's tower and so, no profit to be made. Facing debt, Tesla was forced to abandon the project and the tower was demolished in 1917. 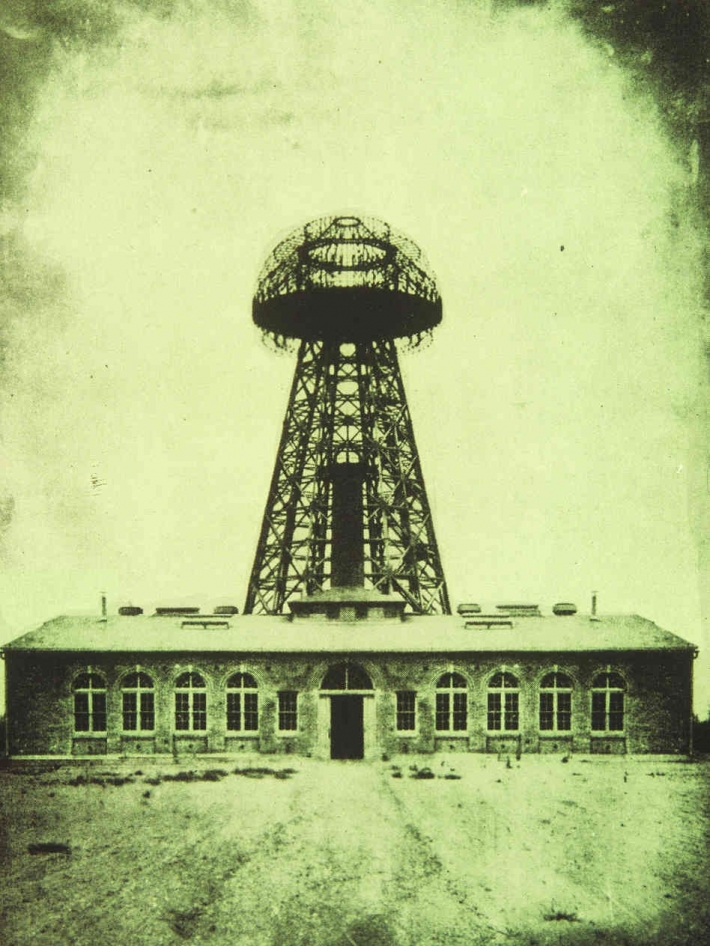 “It is a simple feat of scientific electrical engineering - only expensive - blind, faint-hearted, doubting world.”
-- Nikola Tesla, “The Transmission of Electrical Energy Without Wires As a Means for Furthering Peace” (Electrical World & Engineer, January 7th, 1905)

Tesla's most influential achievement, which was the driving force behind the Magnifying transmitter and the Wardenclyffe transmission tower, was the development of the modern alternating current (AC) system of electrical power. He was famously struck with the idea for this while walking in a Budapest park and reading a passage of Goethe's 'Faust', a text that he knew word for word.

The glow retreats, done is the day of toil;
It yonder hastes, new fields of life exploring;
Ah, that no wing can lift me from the soil
Upon its track to follow, follow soaring!
A glorious dream! Though now the glories fade.
Alas! The wings that lift the mind no aid
Of wings to lift the body can bequeath me!
-- Goethe, 'Faust', Act II

Tesla had a sudden vision of an iron rotor, spinning in an electric field. This field, he understood, was produced by the interaction of two alternating currents out of step with each other. Poetry had provided the inspiration for one of the most important breakthroughs in human history.
It is apt that Goethe's play features the character Faust, who is an archetypal example of ambition driving the pursuit of learning. Goethe's Faust seeks transcendent knowledge of God's nature and power, knowledge he is unable to reach through his study. He makes a pact with the devil Mephistopheles, which costs him his soul. If this story about Tesla is true, then it is strangely apt that this knowledge came to him suddenly, almost like a religious vision. He seems to be likening himself to the over-reaching Faust, and his discovery of alternating current as some kind of transcendent knowledge. Citing Goethe as his inspiration only serves to bolster the cult of personality that accumulated throughout his lifetime.

During the passage above, Faust and Wagner, both eminent scholars, are enjoying a stroll through the park on a Easter Sunday afternoon. Wagner is presented as a far more rational thinker, who prefers to gain his knowledge from books. Faust talks about the spirits and suggests that he would sacrifice the pleasures of Earth if only he could satisfy his spiritual longing. Wagner warns him against this, though later events show that Faust has paid little heed to his words.

“Like a flash of lightning and in an instant the truth was revealed. I drew with a stick on the sand the diagrams of my motor. A thousand secrets of nature which I might have stumbled upon accidentally I would have given for that one which I had wrestled from her against all odds and at the peril of my existence.”
-- Nikola Tesla

It was this breakthrough which led to the cheap and efficient use of electricity to power appliances and light homes on a vast scale. Despite this, Tesla remains relatively overlooked by history, while Thomas Edison is well-known for developing the light bulb. The two scientists were engaged in a prolonged feud, the 'War of Currents', as Tesla's efficient system of alternating current (AC) was a fierce rival to Edison's direct current system. The war was won in 1893, when George Westinghouse (who licensed Tesla's American patents for the induction motor and transformer designs) won the bid to electrify the World's Columbian Exposition in Chicago using alternating current. Edison's bid to electrify the fair with direct current was beaten outright. This gave the opportunity for Tesla and Westinghouse to demonstrate the safety, reliability and efficiency of alternating current, and to reverse the effects of Edison's under-handed smear campaign (Edison had publicly electrocuted animals with alternating current in an attempt to present it as dangerous and unreliable).

Tesla's feud with Edison can be traced back to 1885, while Tesla was working for Edison Machine Works in New York. In the wake of that incident, he was repeatedly under-recognised for his work and often beaten to claiming credit for inventions and discoveries by less modest individuals. Hopefully the Tesla museum can help Tesla achieve the recognition he deserves. Already his name and his achievements have become better known thanks to the efforts of The Oatmeal and Elon Musk's donation, which have drawn attention to a worthy cause. If successful, the museum could become a source of inspiration for potential scientists, researchers and tinkerers. Let it not be forgotten that Tesla's initial vision, which provided the 'spark' for his subsequent inventions and his alternating current system of electricity, was prompted by a passage of Goethe's poetry.

We live in a world of injustice, where millions of people in the Western world are overweight and suffering from related health problems while millions more are starving. Farming of livestock is criticised

This is Part II of an article covering the science of mermaids. In Part I, I noted the depiction of mermaids through history and identified some biological features of humans that would help