All the prominent creatures of mythology seem to go through a period when they are in vogue, usually thanks to a YA (Young Adult) readership providing a cult-like and enthusiastic following for a few years. The Twilight Saga has recently popularised the vampire once more, though Meyer's vampires are lacking in a few qualities held by their predecessors. Dragons have had periods of popularity, thanks to Anne McCaffery's Dragonriders of Pern and Christopher Paolini's Inheritance cycle, to name but a couple. Yet there is one popular creature from mythology and fantasy who seems to have avoided such attention. The Mermaid is an iconic and exotic figure, who has been prevalent in the stories of many cultures since ancient times, though the last piece of mainstream popular culture with a mermaid as the protagonist is possibly Disney's 1989 adaptation of 'The Little Mermaid' by Hans Christian Anderson.

This is not to say that people are not enthused by mermaids. In my research for this post, I discovered the popular past-time of 'Mermaiding', a form of free-diving in which its participants swim with a monofin that is part of a (often beautifully decorated) suit for the legs and lower body, mimicking a mermaid's shimmering tail. I'd like to predict that the next YA sensation will be fronted by mermaids and then perhaps I can claim credit for my intuition if this happens to come true. However, they may be other reasons why mermaids haven't gained the kind of popularity that Vampires, Wizards and Witches, and Dragons have seen. A fin makes for a quite restrictive cosplay and the marine environment could in many ways limit the storyline and interaction with the rest of the world. 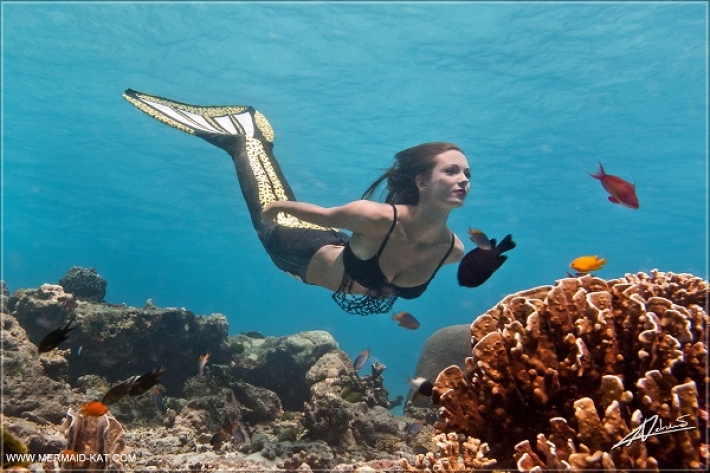 Indeed, in both early tales of mermaids and more recently-penned stories, the mermaids usually appear as nameless extras. Recent fantasy film series such as the Pirates of the Caribbean and Narnia have included mermaids, but they have not played any significant role in the plot of either. One exception seems to be in children's novels, where they are often found and befriended by human children, usually little girls, perhaps as some apparent wish-fulfilment of finding a beautiful and scaly best friend - imaginary, and incapable of escaping onto land - perfectly exclusive. Traditionally, mermaids have not been greeted with the warmest welcome. They are associated with the sirens of Greek mythology, femme fatales who lured sailors to shipwreck with their beautiful voices. Originally they didn't even have the beauty that is now so strongly associated with them. The mermaids of ancient texts were a combination of women and birds, with large women's heads, bird's feathers and scaly feet, and no fins at all. Later texts simply described them as beautiful women. British folklore depicted mermaids in a similarly negative way. In true British form, the mermaids are blamed only indirectly as omens of disaster at sea, whether it be floods, storms, shipwrecks or drownings. 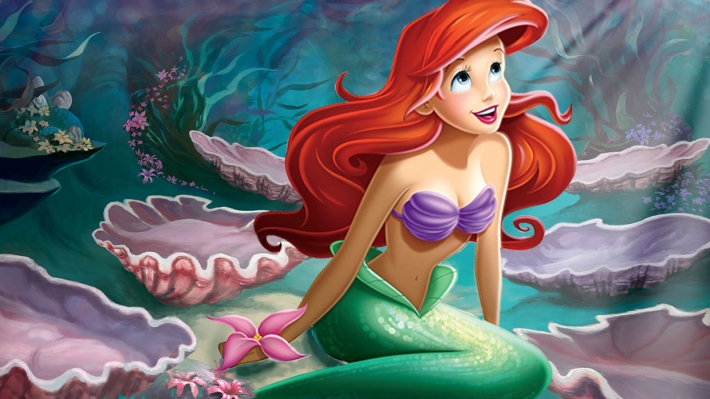 In the rare occasions in which a mermaid is presented as the protagonist, they either spend most of their time in their natural form wishing they could walk on land, or they have acquired the mermaid form as a punishment. Most readers will be familiar with the Disney adaptation of Hans Christian Andersen's fairytale 'The Little Mermaid'. The mermaid protagonist Ariel falls in love with a human prince and longs to have legs so she can walk on land. Ariel's strong-willed character has been praised; she's certainly a girl who knows what she wants and goes to great lengths to achieve it. However, the fantasy element of the story, the fact that she is a mermaid, is made to seem a hindrance, a restriction to her freedom and one she makes a great sacrifice to remove. Ariel agrees to make a pact with a sea witch who promises to grant her legs. In an interesting twist on the earlier mermaid stories, Ariel gives up her beautiful siren voice, which in earlier tales was the feature used by mermaids to seduce sailors and lure them to their doom. Disney provides the cosy romance that we'd expect from the Mickey Mouse creators, but Hans Christian Andersen's original story is far less straight-forward. To avoid any spoilers, you can read for yourself here. While we're on the subject, artist Sakimi Chan does beautiful gender-bending versions of Disney characters.

(Chan also speculates whether Ariel could've found headphones if she had lived in a later age. I wonder whether she would have gone seeking an accompanying iPod - inadvisable! - or whether she'd be content to wear them as an accessory.) 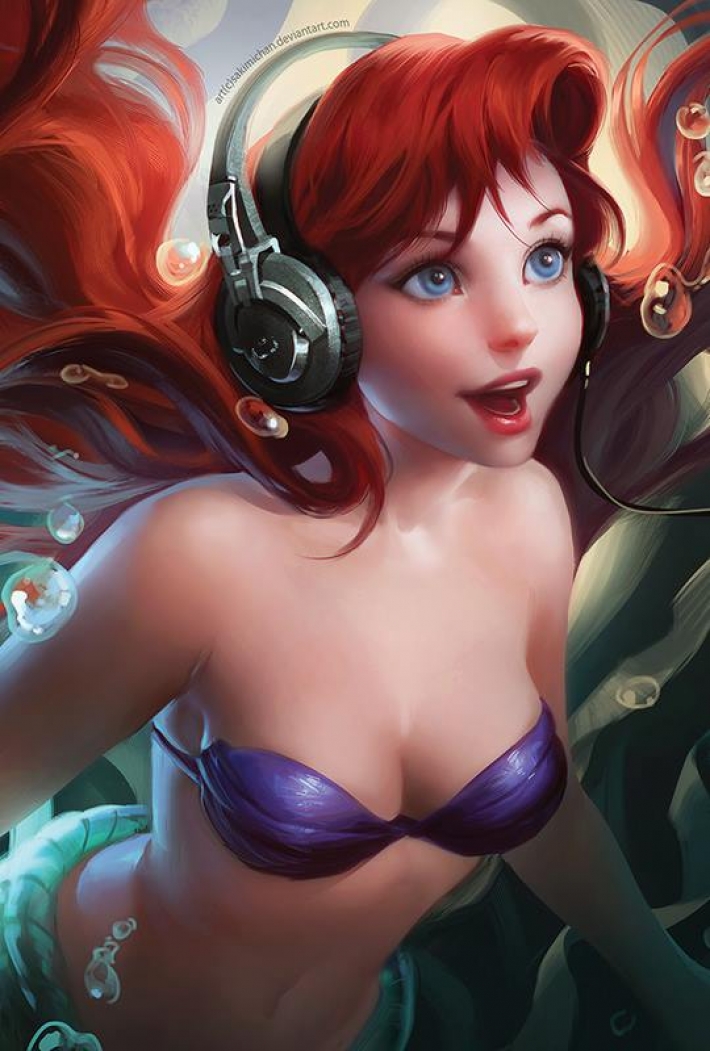 Some early mermaid tales depict the form in an even more negative light. In one of the first stories from ancient Assyria, the goddess Atargatis accidentally kills her human lover and assumes the form of a mermaid out of shame. In one Greek story, Atargatis, also known as Derketo, was a nymph who fell in love with a shepherd boy. She became pregnant by him and so threw herself into a pool in shame, where she turned into a fish. The Slavic equivalent of mermaids are known as Rusalkas, who are restless spirits of young women who died a violent or untimely death, whether by murder, suicide, or before their wedding, and especially by drowning. They do not have the fish-like tail characteristic of other cultures' depictions of mermaids.

From its early beginnings, the mermaid has been presented as a figure rejected by society and the mermaid form almost like a prison. The lack of human legs restrict freedom and the bearer is banished to live in a realm separate from human society. This seems like a difficult image to reverse, but perhaps a clever revival of this ancient myth could take a less anthropocentric view. Perhaps it is science fiction, as opposed to fantasy, that may take up the challenge. 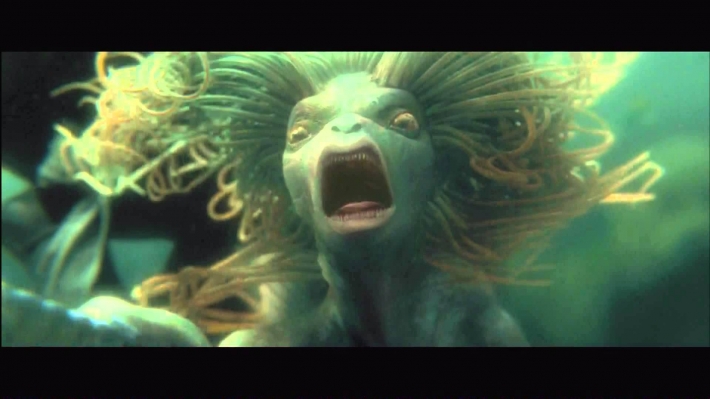 These legendary creatures with the combined anatomy of a human and a fish may seem a completely unnatural concept. How does an animal that has mainly the biology of a human survive underwater for long periods of time? Mermaids could be expected to have adopted gills, like other marine animals, to allow them to breathe underwater. J K Rowling's mermaids, in her Harry Potter novel series, have this feature, and Harry makes use of a spell that grants him gills in order to complete an underwater challenge in 'The Goblet of Fire'. However, humans are not poorly suited to spending long periods of time underwater, and in fact, are better suited to this than a great number of other land animals.

Humans can hold their breath for longer than any other terrestrial animal and this skill is put to the test through the sport of freediving. This is a form of underwater diving, in which participants rely on their ability to hold their breath, rather than on breathing apparatus. French freediver, Stéphane Mifsud, holds the world record for static apnea, that is, holding his breath without swimming. He set this record of 11:35 minutes in 2009 in Hyères, France. German freediver, Tom Sietas, holds the world record for static apnea on pure oxygen, of a staggering 22:22 minutes in May 2012. Other disciplines exist that involve swimming as far as possible without breathing, known as dynamic apnea. All marine mammals must resurface to breathe, but some can stay submerged for an incredible length of time. Wedell seals can dive to 2,000ft and stay underwater for up to 45min. With this knowledge, it seems more credible that humans could in time evolve to stay underwater for greater periods of time.

Humans also have a very flexible spine, which would allow easier movement through the water. Partial webbing between fingers and toes is a possible indication that we are designed to be able to swim, or to swim often. Unlike apes, human babies can swim instinctively at childbirth and we also shed our hair, allowing us to be more streamlined in the water. We also have a highly developed brain, which depends on Omega oils for optimum function. Seafood is rich in these Omega oils, and so would help maintain the intelligent human brain. All these characteristics are used as evidence for the Aquatic Ape theory, which suggests that humans could have had an aquatic stage in their evolutionary past. Our ancestors may have been driven into the water by coastal flooding and forced to evolve characteristics more commonly found in marine animals.

The 2012 Animal Planet documentary 'Mermaids: The Body Found' takes this theory to the extreme and suggests that mermaids could have evolved from apes in this way, explains how this could have occurred and speculates on what life would be like for these animals. It takes inspiration from dolphin pods to describe mermaid social behaviour and suggests mermaids would have bonded strongly with these similarly intelligent marine animals.

Of course, Aquatic Ape theory is just a theory, but it does draw attention to some interesting human characteristics that help us to live in and around water. Perhaps a marine creature with the upper body of a human shouldn't appear as such a ridiculous prospect. In Part II of this article on the science behind mermaids, I intend to investigate further biological features of humans that could explain how a creature with the torso of a human and the tail of a fish could inhabit water, just like the mermaids of mythology, and what changes would have to be made for such a creature to become a possibility.

Dutch Project ‘Mars One’ has gained media attention recently for its ambitious plans to colonise Mars in just under a decade’s time. (Please note that this is an abridged version of an

Following the discussion in Part I of alternative history games and novels that depict a world in which the Axis powers won World War II, I intend to investigate the reality of German

Novel Ideas
—
Of Sirens And Selkies, Part I
Share this