Russian astronauts collecting samples during a recent spacewalk from the International Space Station (ISS) may have stumbled upon something surprising. Having taken samples from illuminators and the surface of the space station, they expected to find contaminants from the engines of docking spacecraft, but instead found traces of sea plankton and living micro-organisms. This revelation was reported by the Russian Press Agency earlier this week, but so far, no explanation has been given about how the organisms came to be there.

Results of the experiment are absolutely unique. We have found traces of sea plankton and microscopic particles on the illuminator surface. This should be studied further.
-- Chief of the Russian ISS orbital mission Vladimir Solovyev

So far, NASA have been skeptical about the claims. Speaking to Space.com, they confirmed that Rosmos (Russia's Federal Space Agency) cosmonauts did take samples during a spacewalk, but they weren't searching for microbial life.

However, the claim made by the Russians is not so outrageous. In the late 1990s, NASA aided the Russian Space Program in an evaluation of the microbial life found on Mir. After discovering moisture and water mass in Mir's Kvant-2 module, analysis of samples revealed many species of bacteria and funghi, along with protozoa and dust mites.

A far cry from the extraterrestrial life Ellen Ripley encountered on the surface of planetoid LV-426 in 'Alien', but nonetheless a possible sign of organisms subsisting in space. High precision equipment allowed for such a discovery on the ISS, the culmination of a series of experiments confirming that some organisms are able to live on the exterior of the space station. This press release from NASA details the research conducted on the ISS.

So if this discovery is confirmed as true, it will prompt further questions relevant to our understanding of life in space: Where did these micro-organisms come from - Earth or from elsewhere in space? And how did they get there?

The plankton are atypical for the area at which the station was launched in Baikanour, Kazakhstan. This means that the organisms are unlikely to have been carried on the hull since before take-off. Some have suggested that atmospheric currents could be lifting plankton from Earth's oceans all 205 miles (330km) up to the station. This seems a little unlikely.

These results could support the theory of Panspermia, which suggests that life on Earth did not begin on our planet, but was brought from elsewhere in the cosmos. Panspermia is a Greek word that means 'seeds everywhere', referring to the belief that there are 'seeds of life', mainly in the form of microbial life, all over the universe. These can propagate through space to begin life in far flung reaches of the universe that they find hospitable. Such microbes could be distributed by travelling on interstellar dust, deflected by radiation pressure, or extremophiles could attach themselves to an asteroid, meteoroid or comet to be carried across space.

The conditions of space flight don't create the most homely of environments; the micro-organisms must withstand zero gravity, extreme temperatures and high levels of cosmic radiation. Some types of bacteria have been proven to be extremely hardy. There is already one known organism on Earth that lives in strong acid: the Picrophilus torridus bacterium lives in hot sulphuric acid springs by keeping the acid out of its cells. This is not as hostile to life as it first sounds. Acids are highly corrosive and destroy tissue upon contact, but this destructive process needs water to proceed. The acid is, in fact, only a catalyst. The sulphuric acid is not harmful to the bacteria, as long as there's no trace of water to make the acid corrosive.

Similarly, it has been suggested that bacteria could live in clouds of sulphuric acid high above the the surface of Venus. The clouds are much cooler than at the surface, making it more hospitable to life, but there are still high levels of UV light and low levels of oxygen. Survival for hypothetical Venusian bacteria may depend on the opposite of what works for Picrophilus torridus: keeping the acid in their cells, and keeping the water out. 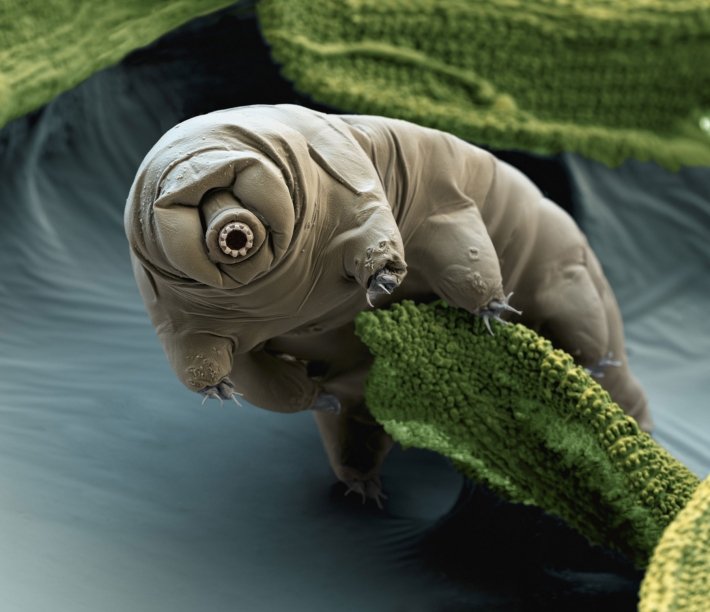 Tardigrade, or the 'Water Bear'.

Another organism that supports the theory of Panspermia is the tardigrade, otherwise known as the 'water bear' or 'moss piglet'. This bizarre-looking creature lives in water and can withstand the most extreme conditions. They can withstand both the low pressure of a vacuum and pressure as high as 1,200 times atmospheric pressure. They can survive extreme heating and cooling, states of dehydration lasting up to ten years and 1,000 times more radiation than most other animals. Quite frankly, these creatures are indestructible.

These amazing creatures have even survived in space. In September 2007, the FOTON-M3 mission took tardigrades into low Earth orbit for 10 days. During this time, they were exposed to the hard vacuum of outer space and solar UV radiation. They were rehydrated back on Earth, and over 68% of the subjects that were protected from high energy UV radiation revived within 30 minutes and many of these produced viable embryos. However, those that were exposed to both the vacuum and full solar UV radiation had significantly reduced survival, though three subjects of Milnesium tardigram still survived these conditions. Further flights upon the ISS with other extremophiles drew scientists to conclude that microgravity and cosmic radiation did not have a significant affect on the tardigrades. This makes them hardy animals for survival in space and useful candidates for space research.

The tardigrades ability to withstand the hostile conditions of space has led people to suggest that they originated in another part of the cosmos and travelled here by one of the methods outlined by Panspermia.

Films and literature featuring extraterrestrial life are often dramatic and far-fetched in their depictions of aliens. In the search for extraterrestrial life, we may have to reconsider what are suitable conditions for life to exist, what form such life may come in and where we are likely to find it.

Many of us, at some point in our lives, have witnessed a 'ghostly' encounter. It may have been resolved - revealed as the trailing fingers of a tree's branches in the wind, or

Ridley Scott has had a successful relationship with Science Fiction, notably through the 'Alien' series and his adaptation of Dick's 'Do Androids Dream of Electric Sheep?' into the cult-classic 'Bladerunner'. He has

Novel Ideas
—
The International Space Station - A Life Raft For Micro-Organisms?
Share this